This Earth Day, Children’s Radio Foundation youth reporter Tony Biduaya wants listeners of his radio show to imagine how beautiful the city of Kinshasa could be.

The capital of the Democratic Republic of Congo, Kinshasa, was once called Kin La Belle, or Kinshasa, the beautiful. Now many of the city’s 17 million residents refer to it as Kin La Poubelle: Kinshasa, the trash can. Tony says the city is overflowing with garbage everywhere he looks. There is no centralized garbage collection system and “people throw their trash out in the streets because there is no other place to put it.”

With his fellow youth reporters, Tony set out to understand why waste management seems to be getting worse each year. Microphones in hand, they started by paying a visit to the city’s biggest dumpsite, Saio, to find out how community members were affected by it. 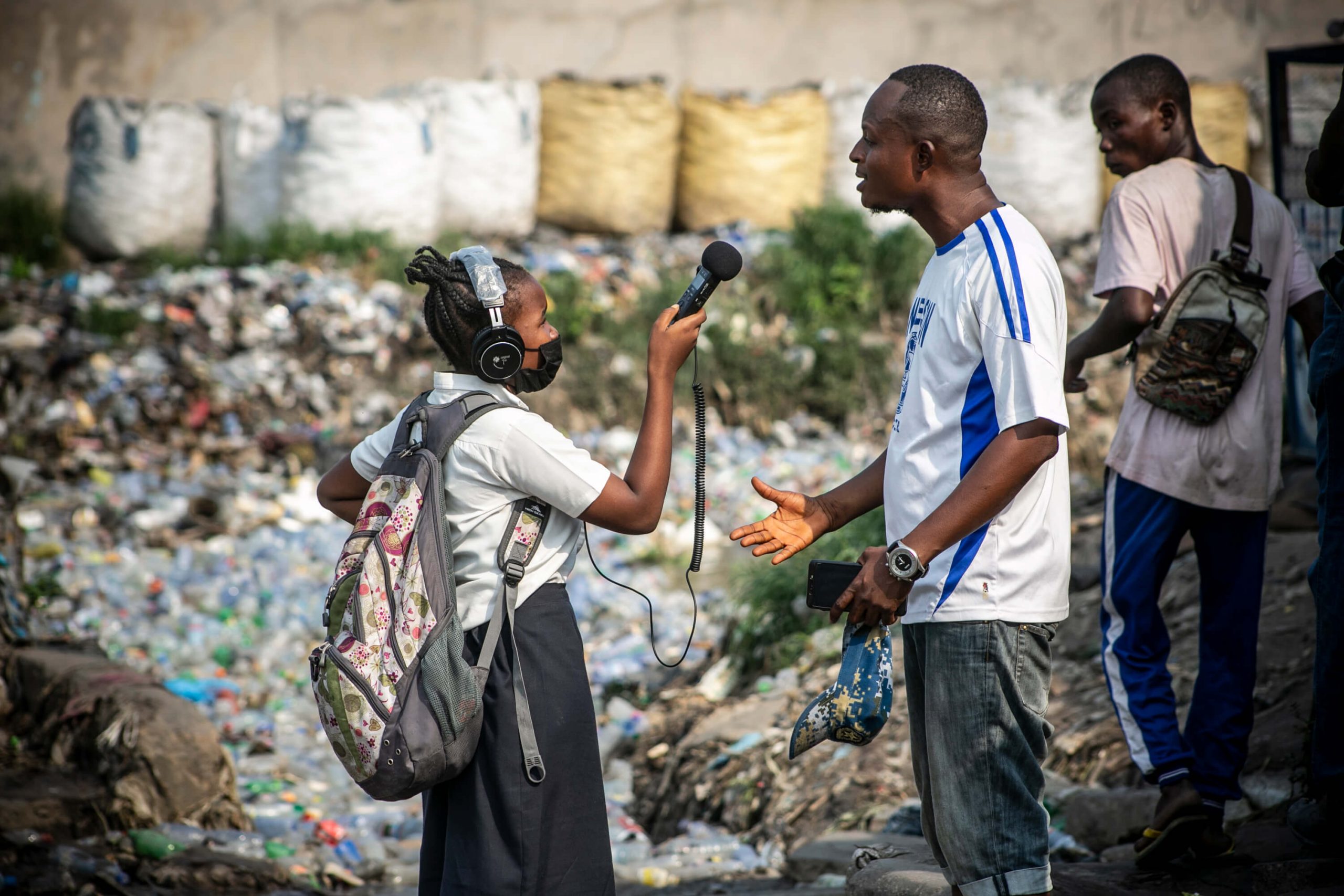 Located in the center of Kinshasa, Saio has garbage collectors removing waste from the site daily, but this does little to put a dent in the ever-expanding heap. “Every day people come with more and more trash. It just keeps on accumulating. And when there’s too much waste, it can lead to an outbreak of disease,” Tony says. 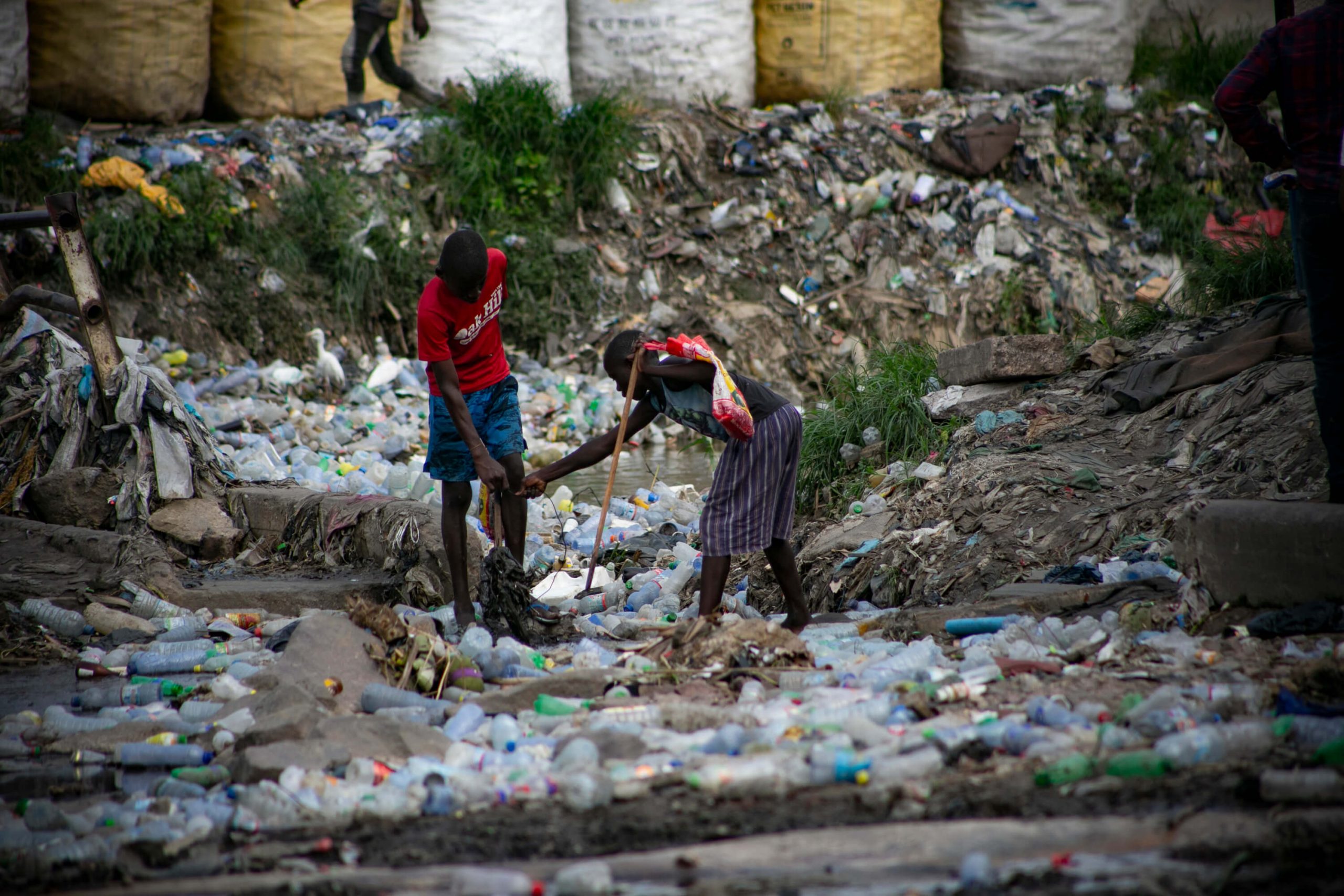 Residents of the surrounding community told the youth reporters that the smell of Saio gets worse and worse. Worried for their families, many see Saio as a massive health and safety risk. It’s the perfect storm for a cholera outbreak.

But when the rains come, there lies their biggest fear. The build-up of trash blocks the city’s waterways and sewer systems so that even small rains can bring about flood-like scenarios. Tony says, “there’s a famous saying that goes: After the rain, comes the sunshine. But in Kinshasa, because the drains are poorly maintained, after the rain, wastewater rises up, neighborhoods are flooded, and sometimes people who stay in houses near the rivers die.” 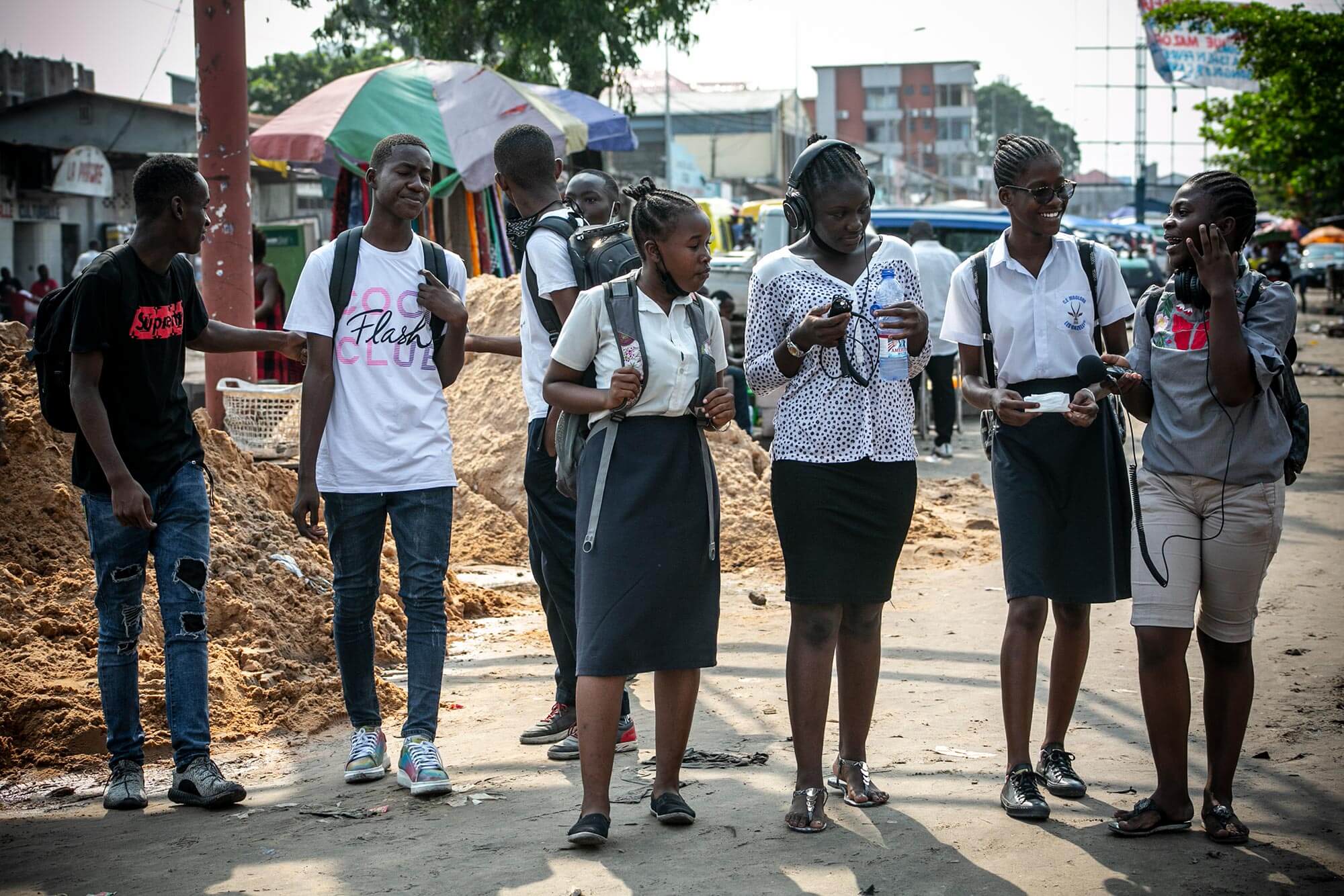 In their reporting, the youth reporters asked community members what could be done to improve the waste management situation in Kinshasa. Residents complained that local officials know what is going on at Saio, but are ignoring the problem. Tony says that government inaction is unacceptable but equally intolerable is that “the population is becoming more accepting of filth rather than cleanliness.”

Not willing to wait on the government to come up with a solution, the youth reporters talked to their listeners about how small actions in one’s own community could make a huge difference. Taking responsibility for the safe disposal of waste, while challenging, is possible, as is thinking carefully about what one consumes and the amount of waste it leaves behind. Tony said that the focus on changing people’s behavior in his own community is something that he learned from being part of the Children’s Radio Foundation. “Radio has let me expose the issues faced by my local community, and to look for solutions to these problems. We see people changing their behavior and some people even congratulate us for the great work we’re doing for the community.”

Despite his passion for climate change and environmental issues, Tony says he wasn’t a natural-born activist. Formerly shy and reluctant to speak up, he realizes that his training in radio has boosted his confidence and enhanced his communication and critical thinking skills. “It has allowed me to combat my shyness. Now I can speak well and express myself clearly, so I can pass on the knowledge I’ve gained to others.” 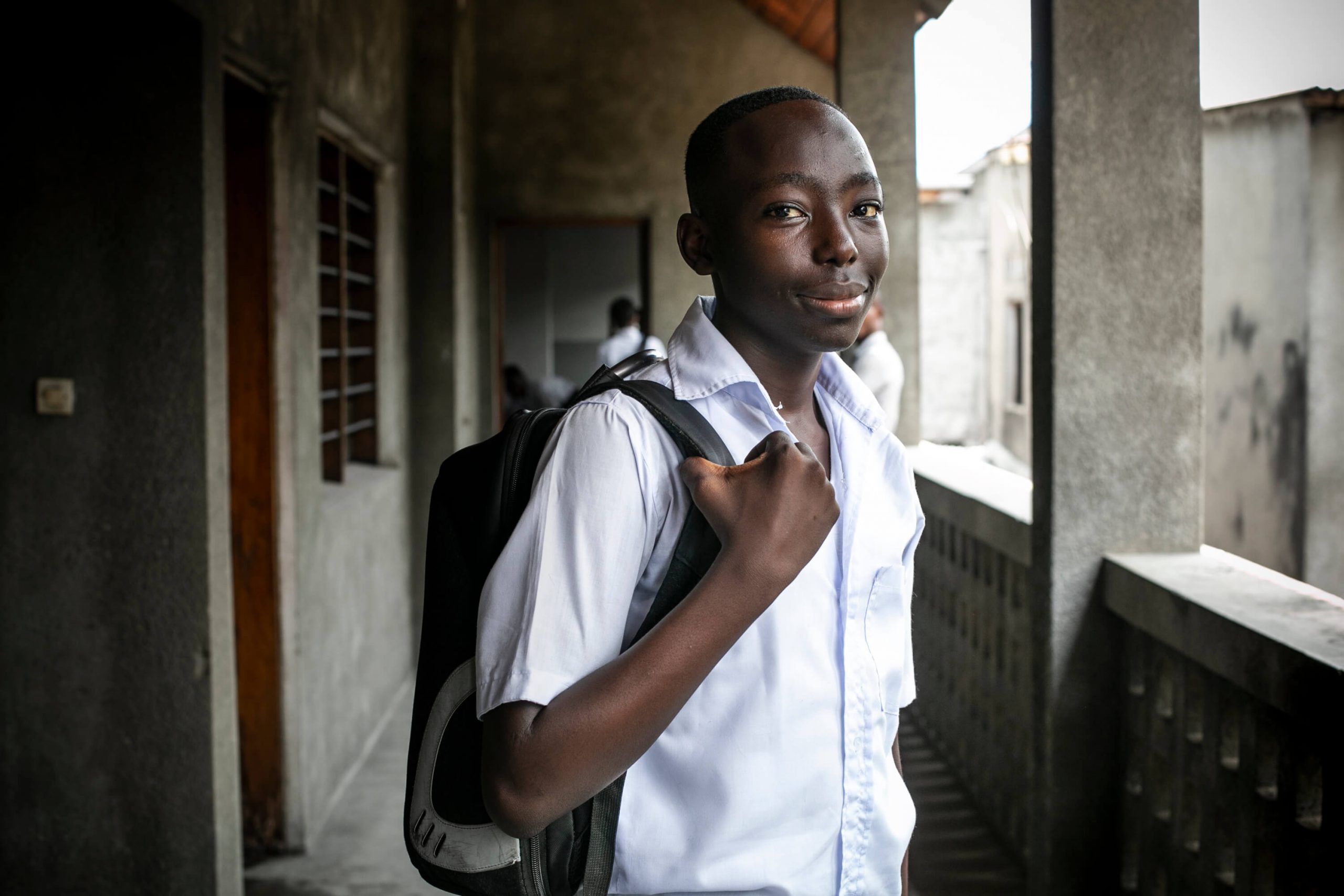 Tony says that working as a reporter and interviewing people about their experiences has given him “a different perspective of the world.” He has seen and heard a lot. “The people of the Democratic Republic of Congo are fighting against all odds for their future and for the future of their country. I like knowing that I am doing something to contribute to the development of my community. I want to continue the fight against climate change and do my part to make Kinshasa a cleaner place.” 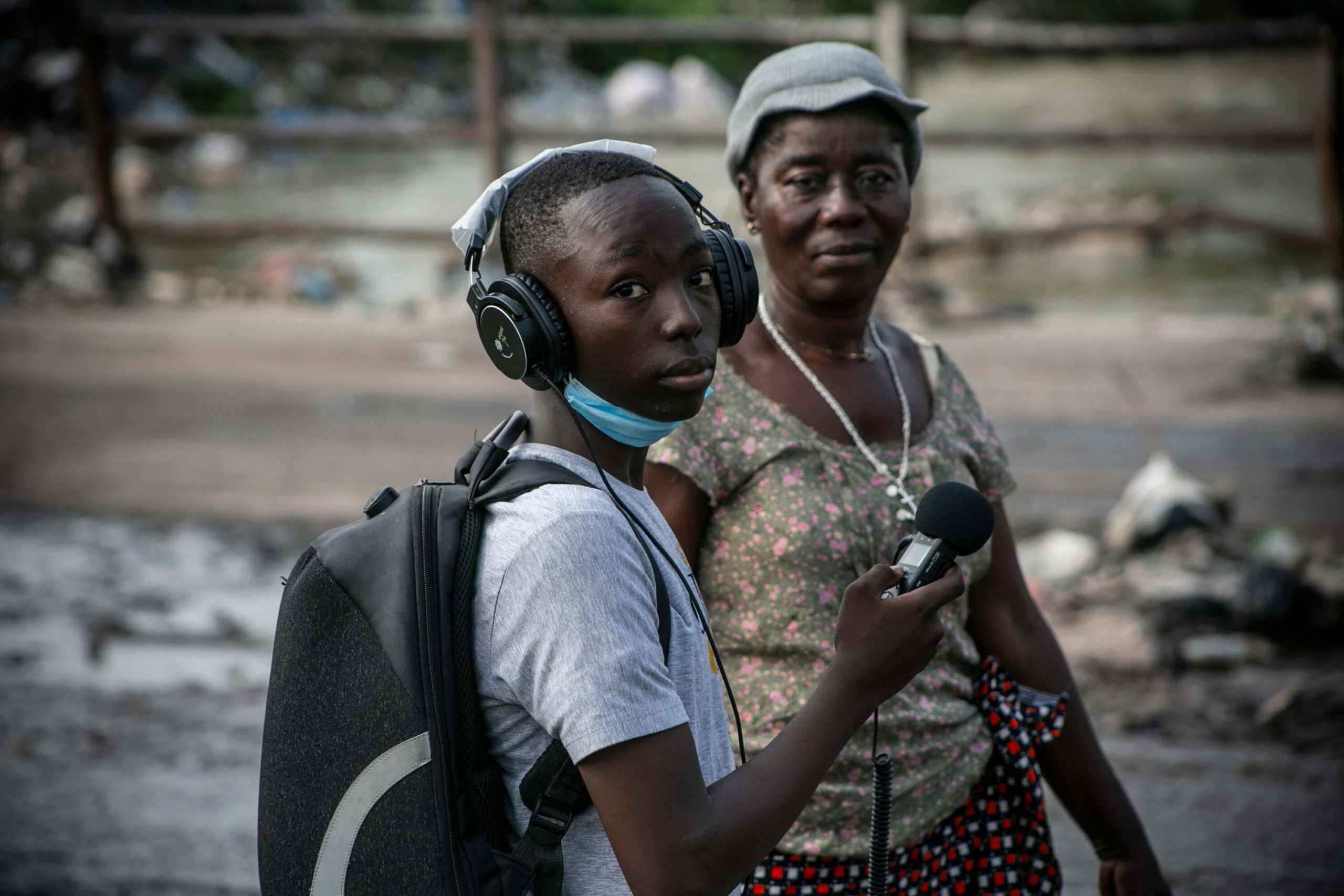 On this Earth Day and every day, we at the Children’s Radio Foundation celebrate brave young people like Tony who ask difficult questions, seek out solutions, and more than anything, understand the critical role they play in solving some of the world’s biggest problems.

Since our inception, we have trained over 2,400 youth reporters who share similar stories of transformation. Your support makes our work possible.

Click here to donate to the Children’s Radio Foundation.